There are a number of traits that the descendants of my Lake family may have inherited. Large ears that stick out, a lean frame, osteoporosis and a bad temper!

It seems to me that quite a few members of my Lake family have been mean, miserable and bad-tempered. I definitely inherited the bad temper. Don't get me mad - my wrath can be quite scathing. The good news is that I have learned over the years how to quell that anger. And most times now I stop to think before I open my mouth.
I have come to the conclusion that my great grandparents are responsible for these bad traits. My great grandfather, Herbert Lake certainly had the ears. So did his sons, Horace, Ralph, Ron and Jack. Some of my cousins inherited the Lake ears that stick out, however, thanks to surgery that family trait has been corrected! 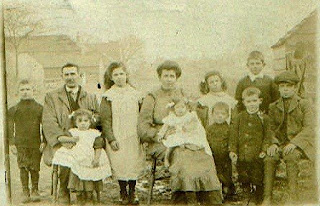 Herbert Lake and family, Boston, Lincolnshire circa 1913.
Ron, Herbert with Kate, Muriel, Fanny with Nora, Elsie, Horace, (in front) Jack, Ralph and Frank Sidney (seated).
Having spoken with various family members it seems that Herbert Lake and his wife, Fanny Crawford were quite miserable people. They were mean and had bad tempers. My dad did not get along at all with his grandfather, Herbert. They weren't just oil & water; they were alcohol & turpentine - a bad combination with explosive possibilities.

Fanny seems to just not have been a happy person. She was never satisfied. I think this may have had to do with her early life. Fanny was born in 1879 in Boston, Lincolnshire, England. Her father, Frank Crawford had a hard time keeping a job. Every census he had a new occupation. Life was hard and money was scarce. When Fanny was 12 years old, her mother, Sarah Stainfield died. Sarah's sister, Martha Louise soon came to live with Fanny and her family.
It wasn't too long before Fanny was out running about. At the age of 17 she came home pregnant and unwed. It is likely her father and aunt/stepmother were not happy about the situation but they seemed to accept it. However, a year later, at age 18, Fanny came home pregnant and unwed a second time. This was just too much for Fanny's family. Remember, this was Victorian England in the late 1890's. The man's reputation was to be upheld at all costs. Fanny had become an embarrassment to her family; she was ruining their reputation.


In October 1898 Fanny entered the Boston Union Workhouse. Two weeks later, her 18 month old daughter joined her. I think there are two reasons why Fanny went to the workhouse. First, she was kicked out of the house and had nowhere else to go. Secondly, the workhouse was the only place that had a hospital. So in December 1898, her second child, Frank Sidney Lake Crawford was born. In January 1899, Fanny and children were discharged from the workhouse. In March she was married to Herbert Lake.

Life at the beginning of the 20th century was pretty miserable for Fanny and Herbert. They were terribly poor and they kept on having children. Thirteen in all! When they came to Canada, Fanny still wasn't happy. My grandmother told me that (her mother-in-law) Fanny, was always moving; she was never satified with where she was living. Furthermore, she was never home. As a child, my grandfather, Ray, who was the youngest of those thirteen children, worked and lived with another family. Fanny and Herbert did not raise him.

My cousin, JG and I had an interesting conversation a few weeks ago about our Grandpa Lake (Ray). He died thirty years ago and we noticed that his children (our parents) rarely speak of Grandpa. My dad tells me they were quite poor growing up. Grandpa Lake forced him and his brother to work an acre of the farm by themselves and then he gave away all the produce to the neighbours. I think Ray had the Lake bad temper and mean disposition.

My 2nd cousin, RL's grandfather was Jack Lake. He was one of Ray's brothers. RL said his family has stories about how mean Jack was and what a bad temper he had. I think some of Ray and Jack's sisters had that mean Lake disposition as well.

I like to think that my generation of the Lake family has overcome the meanness and bad tempers. We aren't all mean and nasty! Some of us are actually quite nice. Still, I won't back down from a confrontation, however, I do know how to extend grace and walk away when need be.
Posted by Kathryn Lake Hogan