The Dog Who Could Tell Time

The 50th edition of the Carnival of Genealogy hosted by Bill West of West in New England is all about family pets.

There are cat people. There are dog people. The Lake side of the family are definitely dog people. We love dogs, especially border collies. My current dog Trooper is a border collie.
As a young girl, our family had a border collie mixed breed, although she behaved and looked like a purebred. Her name was Specs. My mom choose the name. Of course my brother and I wanted something like Fluffy, Patches; you get the idea. Well, my mom would have none of that. She decided that our new puppy would be named Specs because it looked to her that the black lines around the puppy's eyes resembled spectacles. So, there you have it. 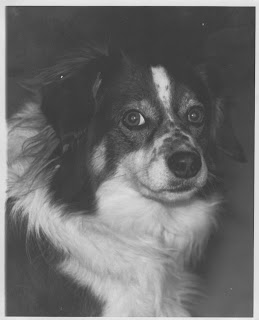 Now, Specs was a cool dog. She could tell time. Every night she would obediently lie on the little mat next to my mom's side of the bed. Once Mom was asleep, Specs would sneak into the living room, jump up on the couch and go to sleep. Come morning, Specs knew what time Mom's alarm clock would go off. So, she would jump off the couch, return to my parents' bedroom, lie back down on the mat and act as if she had been there all night. When Mom's alarm went off, Specs would raise her little black and white head, and look at Mom as if to say "Good morning! I've been here all night!"
Specs also knew what time my brother and I would come home from school. Everyday, she would go to the front windows in the living room and look for us coming down the street.

Specs enjoyed food, and not just dog food. She liked Popsicles, onions, popcorn, chips and of course she would help me on those nights we had liver - yuck! I remember the time when Dad left a piece of steak on the cutting board at the edge of the table. Specs decided to hop up on Dad's chair and help herself. I never saw Dad so mad at our dog as he was that day! Specs didn't care, she was smiling 'cause she had some steak!

Now when our family went out, we would put Specs in the kitchen and close the sliding doors. It didn't take long for her to figure out how to use her paw to slide open the door and go have a snooze on the couch. So, Dad decided to install hook and eye screws at the bottom of the sliding doors so she couldn't get out of the kitchen. Well, Specs was very smart. She figured out how to open that door. She was able to flick the hook out of the eye screw using her nail. She would then slide the door open, and go have yet another nap on the couch. Dad just about blew a gasket over that one! He finally installed spring loaded hook and eye screws and Specs' napping days on the couch were over.

Specs was a great dog. She was a good protector, a great listener and very loyal. Out of all the pets we had as kids, Specs was the best.