This post is written for the 47th Edition of the Carnival of Genealogy.


The topic for this edition is: A Place Called Home. It's time for a geography lesson. Pick out a city/town/village where one of your ancestors once lived and tell us all about it. When was it founded? What is it known for? Has is prospered or declined over the years? Have you ever visited it or lived there? To a certain extent, we are all influenced by the environment we live in. How was your ancestor influenced by the area where they lived? Take us on a trip to the place your ancestor called home.


The place where my maternal grandfather, Joseph Brinley George was born and grew up has always been on my wish list of places to visit. It is not likely you have been there. I haven't - yet.
Joseph Brinley George, son of Joseph George and Ann Davies, was born in 1894 at Sea View Cottage, Hazel Beach, Neyland, Llanstadwell, Pembrokeshire, Wales.


This is a picture postcard of Sea View Cottage. The George family lived in the second unit inland from the beach. The house was still there in 1998 when my brother visited Wales.

Llandstadwell used to be the name of the parish. Neyland is located 78 miles of the capital city of Cardiff. It is close to Milford Haven. The county of Pembrokeshire is now called Dyfed. The modern town of Neyland was founded exactly on Tuesday, April 15th, 1856 when the South Wales Railway officially opened in Neyland. Isambard Kingdom Brunel (1806-1859) is regarded as the founder of Neyland Town. Prior to this Neyland, the insignificant village, in 1851 had fewer than 200 inhabitants. In 1855/56, the Railway Company levelled all of the old buildings. The modern Neyland become a true railway boomtown. By 1861 Llandstadwell parish had increased to 1, 045 people. The inhabitants of this sleepy little village could hardly imagine the importance Neyland acquired and status it gained. A new hotel, shops, housing and churches were built. The town was also known for its fishing and shipping docks. Across the bay was Pembroke Dock. My grandfather, Joseph Brinley George apprenticed as a shipwright there. He also worked for the docks during the Great War. His father, Joseph George worked for the Great Western Railway as a Railway Goods Guard.


Things abruptly changed in 1906 when the Irish rail traffic was rerouted from Neyland to Fishguard. Nonetheless, the people of Neyland pulled together and made it through. They have continued to do so through good times and bad - loss of the railroad, loss of the ferry service to and from Pembroke, closing of the Dock Yard at Pembroke Dock,etc.

And yet, this tiny little town still exists today! 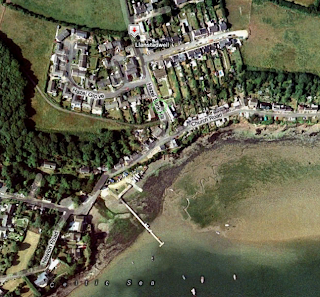 The area is now called Milford Haven. There is a hotel called the Ferry House Inn located on Hazel Beach. I hope to stay there one day when I get to Wales. I wonder if Grandpa George's house is still there.