This post is written for the Carnival of Genealogy, 48th Edition

Mom, how'd you get so smart? We'll examine our mothers' education. What schools did your mom attend? Did she graduate high school or attend the school of hard knocks? Did she attend a one room school house or was she home-schooled? Was she the first in the family to attend college? Maybe your mom took self-study courses or was an avid reader. Tell us all about how a mother figure (mother, grandmother, mother in law, godmother, etc.) in your life became so brilliant!


Well this is going to be an emotionally tough one to do. Not that my mom wasn't smart because she was. However, this certainly brings back memories about the times my mom would share her memories about her childhood and school days.

We had a saying in our George family when someone did something really smart. We would say that he or she was one smart cookie. I have no idea where this came from or who started it but still to this day I have been known to say this.

My mom was Edith George, although she preferred to be called Edie. She was born in 1946 in Windsor, Ontario. Her formal education was started early. As a youngster she attended and graduated Nursery School. Edie is in the back row, second from right.

As a young child she attended elementary school at Harry E. Guppy School. She received her Grade VIII Promotion Certificate on 26 June 1959. Her high school years were spent at Kennedy Collegiate Institute where she graduated in 1963.

Edie then entered the nursing programme at Grace Hospital School of Nursing, Windsor, Ontario. During her time there she was the recipient of the Christine Waterman award. 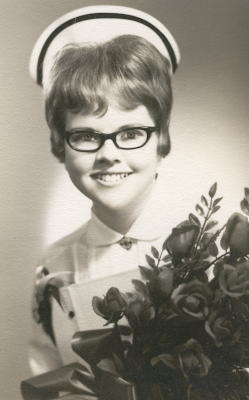 Edie's first full time position was at Metropolitan General Hospital in Windsor, Ontario. Shortly thereafter, she secured a position as Operating Room nurse at Evangelical Deaconess Hospital in Detroit, Michigan. She was a member of the Ontario Nurses' Association. Edie continued her education in nursing and health care. She received her Bachelor of Applied Science degree from Sienna Heights College in 1992. She graduated from Wayne State University with her Masters Degree in Instructional Technology in 1997

Although Mom was educated, she was also smart. By this I mean she had some old fashioned common sense. She knew the difference between right and wrong. She knew how to raise a family. She taught my brother and me important life skills such as learning how to cook, clean the toilet, and mow the lawn. There were no gender segregated jobs in our house. If it needed to be done and you were the one appointed to do it, then you did it. Mom also taught me how to pay bills and how much I should spend on my rent or mortgage. I learned how to budget my money and my food. Edie was "Queen of the Casserole". During the economic recession of the late 1970's - early 1980's, she really learned how to stretch her food budget and make really good casseroles. In fact, my brother who works in the food industry has been known to serve one of mom's casseroles in the corporate cafeteria! Long live the Miss Swiss casserole!

Mom was a great supporter of my brother and me. No matter what we decided to do - careers, hobbies, whatever -as long as we gave it our best shot, she supported us. Even when we failed, she would help us pick ourselves up, dust off the dirt, give us a hug and then say "What are you going to do about it?" She was never one for self pity. She provided us with smarts for how to do life.


In the spring of 2005, Edie was diagnosed with breast cancer. Knowing the importance of family and family history, her last request was that her grandchildren would not forget her. That request has been granted as my children frequently learn about the life of Grandma Michon.

I like to think the reason why I'm so smart is because I learned so much from my mom. She was a champion of education and a supporter of common sense.

" She was one smart cookie!"
Posted by Kathryn Lake Hogan