Well, that may be stretching the truth a bit. However, Samuel Shobat Ryckman, my 2nd cousin, 5 times removed did serve as a Member of the 7th Parliament under the Conservative majority of Sir John A. MacDonald. This Parliament was in session from April 29, 1891 to April 24, 1896. During that time, five different people served as Prime Minister. This was the second longest parliament held in Canadian history. More details can be found at 7th Canadian Parliament on Wikipedia.org.

In the 1881 Canada Census, he is enumerated as Samuel Richman with his wife Sarah, their children George M., Irene V., Jane, and Samuels' mother, Permilla. Samuel's occupation is recorded as Land Agent.
The 1891 Canada Census list Samuel as a gentleman, although by this time he was serving as a member of the House of Commons.

Samuel died in Freeport, New York on August 16, 1929. A search on Ancestry.com found his obituary as follows: 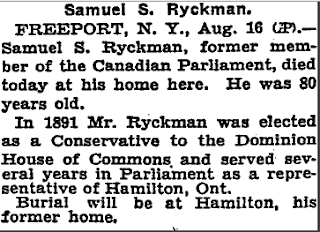 I had wanted to find an ancestor who met the criteria for this edition of the Canadian Genealogy Carnvial. I didn't know if I had any famous Canadian ancestors or relatives. However, a Google search for "ryckman" found Samuel Shobel Ryckman. I'm certainly glad I found him.

Written for the 2nd Edition of the Canadian Genealogy Carnival. Sources provided upon request.